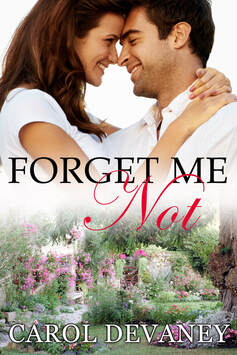 Sarah lives with her mother in Savannah, GA. Her father is deceased. Sarah and Owen dated their junior and senior years in high school. One dreadful rainy night, Sarah picks up her nephew from a friend’s house. On the way home she has an accident. Her nephew almost dies, is hospitalized for two months and in physical therapy for a year. Devastated, Sarah withdraws from everyone, including Owen, because she feels a heavy guilt that she hurt her nephew and is unworthy of love.

After graduating, Owen goes off to college. Owen still loves Sarah, but feels rejected. He decides to get on with his life and marries a woman who he thinks wants the same life as he does. When she becomes pregnant, it's all over. She stays with Owen until the baby is born, then signs all parental rights over to Owen. Owen’s brother and wife take in the baby girl while Owen finishes college. Owen’s brother passes away during Owen’s third year of college, due to Leukemia. After graduation, Owen finds a position as an engineer near his daughter. His daughter, Emma, still lives with his brother’s wife until Owen gets settled in and is able to care for her.

​Now, four years later Owen is back in town. Sarah’s mother has passed away and left her shop, Creative Gifts, to her. While in town for his daughter’s birthday, Owen runs into Sarah at the post office one morning. He can tell Sarah still has feelings for him. His feelings haven’t changed towards her either. He mentions he needs gifts for a four-year-old girl and Sarah gives him her business card.

He drops into the store and buys several gifts, then leaves them to be wrapped. When Owen isn’t able to pick up the gifts, his sister-in-law picks them up. Sarah notices the woman’s last name is the same as Owens. She assumes the woman is Owen’s wife. Regret that she has lost Owen once again, tears at her heart.
EXCERPT
Chapter One

The line inside the post office flowed from the first customer waiting, all the way back to the entrance. A fleeting glimpse at several of the faces revealed not many were in a much better mood than she was. They’d tolerated the long wait, though from the look on their faces some had begun to lose their patience, their arms laden with letters and packages.

Sarah Hall studied the woman in front of her, who bore the appearance of elevated pressure, wrestle an armload of mail. Her young son, who appeared to be about five, pitched whatever advertisements or other paper he could find in the air and over the floor. She reached out and caught a handful of the woman’s letters, before they slid into the young boy’s pile of paper he had now turned into a racetrack.

After a ten minute wait, and with a groan, she counted to fifteen. She was still sixteenth in line from making a get-a-way and back to the shop. She’d promised Lisa a Shrimp Po Boy from the Crab’s Head today. Her feet ached from standing too long and now lunch was going to be late. More importantly, she and Lisa had orders to box and wrap this afternoon for Mayor West’s daughter’s baby shower.

“Why does everyone choose to mail their letters at the same time?” she mumbled then glanced at her watch.

“The same reason we’re here,” a voice from behind her confirmed.

Sarah turned, and as she did, her purse strap slid down her shoulder, along with her purse which tumbled with a thump against the man’s hands. The next thing she knew the box he held flipped over, which tossed the letters and scattered them over the floor.

As always, when Sarah laid eyes on the man, she’d of course, revealed her clumsiness. She did her best not to stare, but this time instinct had her checking out his hand, more specifically his ring-finger, which was now tangled in her purse straps. The man wasn’t wearing a wedding ring. She looked up, stared into his big brown eyes…and melted.

Would she ever get over the man? Okay. That was a no-brainer. She already knew the answer to that one.

Owen made no secret of sizing her up. Her own gaze traveled down the length of the man and for the first time in her life, she stuttered. Sarah took a deep breath.

Why someone hadn’t snagged him was beyond her. Owen had matured over the past four years and was more handsome than ever.

When she’d last seen him, he’d jogged alongside her for a few minutes on the running track in E-Way Square Park.

His eyed caught hers and held for a moment. “Visiting a friend.”

A friend. Okay, then. Evidently he wasn’t going to explain.

Sarah flipped her shoulder length auburn hair behind one ear and bent down. She hoped she could refrain from stuttering again. “I-I’m so s-sorry. H-here. L-let me h-help you.

Owen chuckled and flashed a warm smile. “No problem,” he said, then set the now empty box on the counter, while side-stepping around the young boy to gather his mail. “I have it under control, Sarah.”

Aren’t I the klutz? And where did that stutter come from? Again.

She moved aside to give him room to gather his mail. “You remember me?”

“Of course. How could I ever forget you? The best time I ever had on the Ferris Wheel was with you. It’s good to see you again, Sarah.” he said and stuffed the box with letters, then pointed ahead of her. “You can move up now.” His smile widened. “There are only nine more in front of you.”

Sarah shifted her arm load, slow to progress behind the little boy who was now lying on the floor, spinning in circles. As she lifted her foot, her shoe caught the edge of the counter and she all but fell on her face. Owen grabbed her arm before she hit the floor.

Every muscle in her body tightened and her brain ran through the times they’d shared.

Even if was for protection, he would have to touch me.

Great. Just great. I’ve made a fool of myself again.

“It seems I’m forever coming to your rescue.” He grinned. “Not that I minded. Ever. Remember when you almost fell backwards off the diving board?”

“Yes. I do.” I wonder how many shades of red my face is? “You were always there for me.”

Check back soon for updates. Sign up for my Newsletter for the latest news on my novels.
Copyright ©2020 by Carol DeVaney
All rights reserved. These novels, stories and any portion thereof may not be reproduced or used in any manner whatsoever without the express written permission of the author or publisher except for the use of brief quotations in critical articles or reviews.