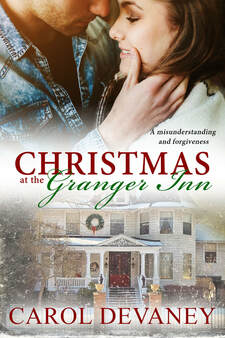 Christmas at the Granger Inn

A Sweet Christmas Romance. A reunion, a ghost and second chance at love.

When a ten-year high school reunion tosses two-year grieving widow, Sydney Hall, and her first love, a widower, Cole Meyers, back together, the weekend turns into a fiasco. Seeing Cole again leaves Sydney with a strong reservation of what she wants.

Cole vows nothing will stand in the way of winning Sydney back. The Inn’s matchmaker ghost conspires to get them together, along with a request to solve the mystery surrounding the ghost’s death.

To risk facing what tore them apart, could promise a new place they can both call home.

“I. Don’t. Want…Don’t. Plan. To. Go.” Sydney Hall gave Kara a stern glance and pressed her lips together. “End of discussion.”
“Come on.” Kara snagged another piece of chocolate mint from the candy dish on the counter, then popped it into her mouth. She slid her gaze sideways toward Sydney. “You know he’ll be there. Right?”

“No…I don’t know he’ll be there. Most likely he will be, though. It’s been too long…there’s too much distance, and too much time, passed between us. Besides, the most important thing is, Cole is married. Married for many years. Or had you forgotten? I won’t go chasing after a married man. You of all people should know that.”

How Sydney sometimes wished Cole wasn’t married. He’d crossed her mind from time to time since Will’s passing. But then, memories of the blessed marriage she and Will had shared bubbled to the surface. She was wrapped up in getting through each day without Will, and pushed any thought of Cole Meyers aside.

“Yes, and I respect your morals. But what will it hurt to go to the reunion? Haven’t you ever wanted to meet his wife? See what she’s like?” Kara urged.

Quiet, Sydney reflected back to the one time she’d actually seen Cole’s wife, other than a photo of their wedding announcement in the Virginia Perks newspaper. When she’d turned to leave the spa, she had faced a lovely, slender, brunette. It was no wonder the woman’s petite beauty had captured Cole’s interest so long ago. Sydney had been happy with Will, and also glad that Cole had found someone.
Still, there was truth in that you never forget your first love. Sydney was no different.

Later, she had been happy to hear they’d moved fifteen miles from Raddwell Corner, so they wouldn’t be glaring fixtures in town. That also meant Cole wouldn’t be around to run into, which was a good thing for her heart.

Time for the two of them had ended long ago. The hopes she’d placed for Cole and herself for the future, as a young girl, had evaporated like a wisp of smoke. Cole hadn’t trusted her since he’d seen her hug and kiss Ron Bacon on the cheek, at a Friday night football game years ago. That hug, and kiss, had been innocent enough. Ron’s mother had passed away and, out of consideration for her friend’s loss, Sydney simply wanted to show her support. But Cole hadn’t viewed it that way. Granted they’d both been young, still she’d never given him reason to mistrust her. But he had, and she’d been devastated.

Sydney had fallen head over heels in love with Cole, but after six short months, she’d had to deal with the loss of young love. She mourned what might have been, but to be with someone who had no faith in her…would only make her miserable. After she’d grieved for their relationship, then came to grips with it, she dusted herself off, and had gotten on with her life.

​She was no fool. She hadn’t looked back.

Yet looking back now, she had by no means completely forgotten her first love. She had thought the love she and Cole shared was mutual, one that would last forever. His love had vanished because of his anger and misinterpretation of the sympathy she had shown for a grieving friend.

Often she had wondered if Cole harbored any regrets that he had made such a hasty decision, and it had been hasty. He hadn’t given her the chance to explain when he walked up on her with her lips on Ron’s cheek. All the explanations in the world wouldn’t change the truth of what had happened, even now.

It was too late for them to be together again, particularly since he was married. It was just as well. He probably still believed his assessment of that night years ago was truth.

Sydney watched snow pile against a window pane as moisture gathered around the window inside. Mrs. Granger and her team would be busy decorating and baking for the reunion at the Inn. Sydney hadn’t been to a reunion since she and Will had married. Something had always stood in the way.

She hadn’t missed attending the reunions, because she’d had Will. He 'd been enough.

​Sydney smiled at Kara. “I’m sure she’s a lovely person. Cole Meyers wouldn’t be involved with someone less than remarkable or perfect,” she said. “You know how much he valued perfection.”

“As most of us do with age, he’s probably softened over the years.” Kara slid her feet back inside her boots and draped her coat over an arm. “Look, as you know, the reunion is a week from Christmas Eve. Won’t you consider making a reservation? It’s kind of late, but they may still have an available room. Anyway, it’s worth a try if you’ll reconsider.”

Sydney glanced at the calendar on her desk, across from the sofa. “Yes. It’s a sure bet they’re full. Everyone usually attends and enjoys seeing old acquaintances at the reunion. It is sad, though, to learn of the ones who’ve already passed away. They’re still so young.”

Most of her friends in Raddwell were content to allow Sydney time to grieve her husband’s passing in private. Kara did too, most of the time, but she always had Sydney’s well-being at heart. Kara wasn’t shy. She said what was on her mind, whether Sydney liked it or not.

Kara placed a hand over Sydney’s warm hand. She spoke candidly, yet delicately. “You need to get out more. Be around people. I know you’re still grieving over the loss of your beloved Will.” She laid her other hand on Sydney’s shoulder. “Sweetie, you’re still too young to live like a recluse. I love you and it breaks my heart to see you this way. You’re too sad…Too alone.”

At twenty-seven Sydney was already a widow. Her husband, Will, of five years, had met with a horrific on-the-job accident last year. When the crane operator had misjudged the boom angle, the crane had tipped over. Unfortunately, Will had been standing directly in the path of the crane, and hadn’t had a chance. The doctor had confirmed he’d died instantly. Sydney prayed that was true. She couldn’t bear the thought of Will suffering.

The books she’d read on grief helped some, but mostly had little within the pages to ease her heartache. Her heart pounded every time Will’s memory stirred her thoughts. He hadn’t deserved to die so young and have his life snuffed out. The accident was horrible, and she couldn’t get it out of her head.

Yes, her life had been heartbreakingly lonely since his death, but Sydney was doing okay now, well as okay as anyone could be after such a sudden and tragic loss. She had no intention of forgetting him. Not ever.

She also had no intention of letting Cole back into her life. Cole and the love they’d once shared, was part of her past, and that’s where she planned to keep him.

Although as much as she tried, and as much as she’d loved Will, there was still a part of her memory that caused an ache in her heart and for what might have been.

“Hello…Sydney. Are you still with me?” Kara waved a hand in front of Sydney’s face. “You’ve gone off into never-never land.”
Sydney sighed. “Of course I’m still here. I’m just thinking about the past.”

“That will never do, my friend. Leave the past where it belongs, in the past. You know I’m leaving next week to spend Christmas with my folks. You’ll be alone for the holidays. I hate to think of you rambling around this big old house by yourself, especially for Christmas.”

“It’s not so big. I close off the extra bedrooms, then it feels warm and cozy. I’ll be okay. Besides, you’re such a worry wart.”
Kara smiled at Sydney. “Won’t you please reconsider going to the reunion and making an old friend happy?”

Sydney looked into Kara’s eyes. “You’re a delightful supporter, Kara.” She hugged Kara, then stepped back and shuffled through the mail on the counter.

Kara walked back to the coat closet and grabbed Sydney’s coat. “Let’s go get you a Christmas tree. I’ll stop by the house and pick-up a quiche I made this morning,” Kara said. “We’ll make a day of it. How does spinach, mushroom and bacon quiche sound?”

“You know it’s my favorite. I’ll take you up on the quiche, but if I go to the reunion, I won’t need a tree, now will I?”

Kara squealed and handed Sydney her shoes. “You mean it? You’ve considered going?”

Copyright ©2020 by Carol DeVaney
All rights reserved. These novels, stories and any portion thereof may not be reproduced or used in any manner whatsoever without the express written permission of the author or publisher except for the use of brief quotations in critical articles or reviews.